Bullying in the Music Classroom

In 2013 one of my former students (now married with 3 children) found me on Facebook and friended me.  She wrote:

I wanted to wish you a merry Christmas and many blessings this new year! As another year closes I often reflect and I wanted you to know, that I have often thought of you through these years!

Going to school was extremely hard on me in ________, with the non stop bullying, however I really feel your music class was the one happy place I had, where I felt I belonged…this was due to you! Your strength of character always was inspiring, and I still remember the day that I was pulled from band class to,have my hair inspected for lice because of some unkind remarks…but what I remember most is how you later went to my social class and let my class have it for being so unkind….you were the first person/peer at ________ school whoever stood up for me! It’s a kindness that I have always appreciated and taught me a great deal about the kind of person I wished to be!

To be honest, this incident happened more than 20 years ago, and I don’t remember it as well as my student did, but I’m so glad that I helped, and that what I did was the right response for her.

Last week, a friend who is a wonderful, involved, loving mother, lost her 13 year old daughter to depression.  In my teaching career I lost a beautiful, talented grade 12 student to depression, brought on by bullying.  I’m not an expert, but I’m trying to put some thoughts together with some ideas of what we as music teachers can do to prevent these terrible tragedies.

Hand Holding:  I have a video of a preschool class making a circle, where one child didn’t want to hold the hands of the child next to them.  Yes, this starts in preschool.  In this class, I stopped them and said, “It’s really nice to hold hands in the circle with anyone who asks you.  It isn’t nice when we’re making a circle in music class to say no.”  Sometimes, I  position myself, to hold hands with the child that may be rejected by the other children.

Choosing Partners:  When you play clapping games or games with a partner, before you play, talk to the students about the right way to ask someone to be a partner, and what the right response is.  I talk about how in a school I might not be best friends with a colleague, but if invited to work with them on a committee, I accept graciously.  Practice inviting and accepting partners with your students before there is a problem.  This is a real world skill, and in the music classroom we have many opportunities to work on it.  I often position myself, to be partners with the child that may be rejected by the other children. (or as a discipline strategy with children who are not participating appropriately in a game)

Mean Comments:  Sometimes you’ll hear a child say something about another student that is mean.  I was unhappy about things that I heard my older grandson saying about his younger brother.  I made this poster and it’s on the fridge in their house.  I’ve told them, that they’re going to have to make a copy of it if I hear mean comments. 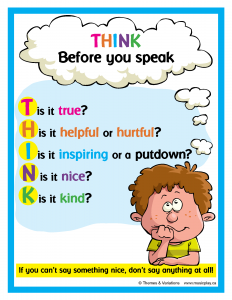 Joanie C wrote to add another suggestion:  Another thing I do is when we are doing mixer dances, before we start I let the kids know that everyone has to have a partner, and no one can say “no” to someone who asks them to dance.  Additionally, I let them know that for every refrain where we are choosing partners, everyone will be choosing new partners each time.  So there are no friends that are forever together and excluding others, there are no bullies who are saying “don’t dance with him/her”, and the opposite, if someone is dancing with a student they don’t feel comfortable with, it is only for one refrain and then they will move on to others.  These are the rules, no exceptions, and I always end up seeing kids who supposedly don’t get along with each other dancing and laughing together.   Sometimes breaking down the bullying has to be very directed!

The following suggestions are adapted from https://blog.ed.gov/2012/04/top-5-ways-educators-can-stop-bullies/ with my additional comments.

1. Create a Safe and Supportive Environment

Establish a culture of inclusion and respect that welcomes all students. . Set a tone of respect in the classroom.  The three specific suggestions above all will contribute to providing a safe, supportive environment in your music room.

2. Manage Classrooms to Prevent Bullying.   Develop rules with students so they set their own climate of respect and responsibility, and reinforce the rules by making expectations clear and keeping requests simple, direct and specific.  I love my Music Room Rules Posters that lay out the expectations clearly, in a musical way, and that make such a great lesson and bulletin board.

Use good manners, be nice and be kind.

Speak when acknowledged, always put your hand up.

In the music room, always try your best.

Care for the instruments and all of the equipment. 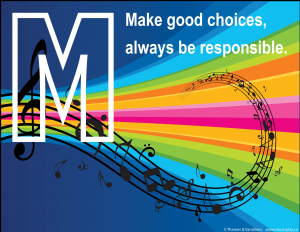 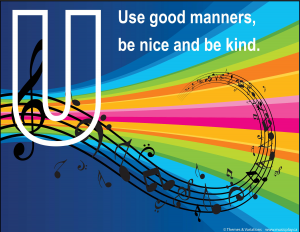 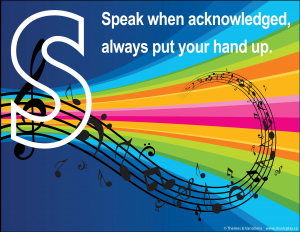 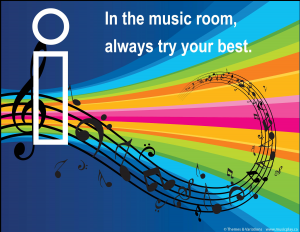 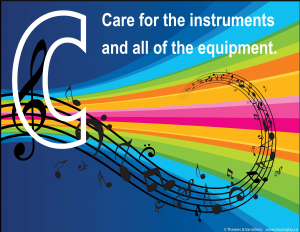 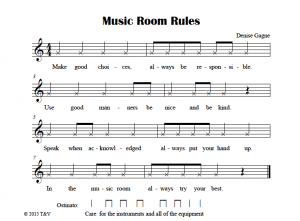 1.  Have the students read the rhythms.

3.  divide the class into 2 groups – one reads the rules, the other does the ostinato

4.  Give the students a suggested body percussion to go with the first line.

6.  Choose instruments to play the ostinato.

7.  Decide on a form for performance

– drum and say the ostinato 2x as an intro

– ostinato continues while chant is performed 2x     – end with the ostinato 2x dim.

4. Find Out What Happened.    Get the facts, keep all the children involved separate, listen without blaming and don’t call the act “bullying” while you are trying to understand what happened.

Finding out what happened can be really difficult.  I had an incident in a middle school band class.  It happened while my back was turned, and although I was 99.9% certain who had assaulted the student, I didn’t see it, and the other students wouldn’t talk.  The principal wouldn’t follow through.  I felt he should have got some of the other kids in the class alone in his office and asked them directly – I figured they’d cave and give up the name of the bully.  He didn’t take the time to do this.  In the end, all I could do was watch the bully really closely in my classes until the end of the school year.  It never happened again, but I felt very frustrated that the the student who’d physically hurt another child got away with it.

5. Support the Kids Involved.  All kids involved in bullying—whether they are bullied, bully others, or see bullying—can be affected. It is important to support all kids involved to make sure the bullying doesn’t continue and effects can be minimized.

Every child has the right to be respected, included and feel safe in school.  As music teachers, who often teach every child in the school, we are in a unique place to promote inclusion of all and create a safe and supportive environment for students.

This is the 8th annual – and we’ll be joined by Thom Borden, for an amazing 2 days of workshops!

American and Overseas Teachers – Registration for Artie and Denise

With Coronavirus cases topping 100,000 worldwide, schools are starting to close and teachers are having to teach their music classes online. There are a variety of...